This weekend saw the Niels Klim awards being handed out at the Fantasticon in Denmark. The Niels Klim awards are awards for best science fiction published in Danish the previous year (including translations), and I had a short story nominated, so excitement was rising.

In the category Novelette the finalists were Alastair Reynolds (again) with Merlin’s Cannon and A. Silvestri with Faderens Sønner (Sons of the Fathers). The winner: A. Silvestri.

Finally in the category Short Story the finalists among 11 nominees were your truly with Homo Arachnida and Lars Ahn Pedersen with En helt almindelig død (An ordinary death).

Then a surprise – we had exactly the same number of votes, so it was a tie. A shared victory. 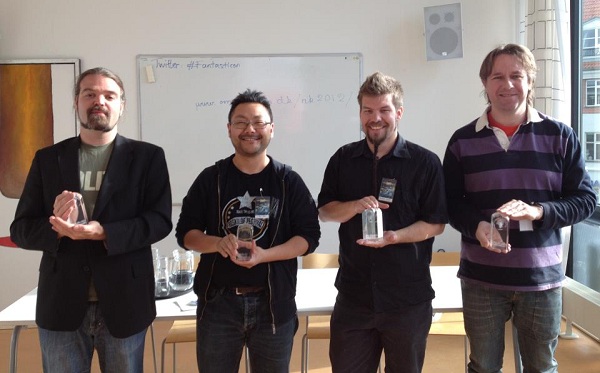 I’m very proud to recieve this award among such prominent company and will explore the science fiction genre further.
I’ve had Homo Arachnida translated to english and it is currently rotating the markets, so hopefully you will all be able to read it in the not too distant future.

One Response to Another scalp