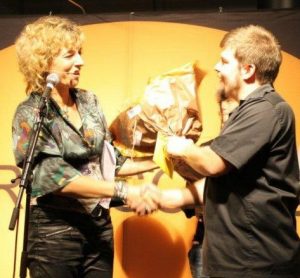 Receiving the award from the Minister of Education.

In 2011 I won the tongue twister Kulturministeriet og Ministeriet for Børn og Undervisnings Drengelitteraturpris 2011 (The Ministry of Culture and the Ministry of Children and Education’s New Literature for Boys Award 2011), and was handed the award by the Danish Minister of Education. A horror short story centered on a cellphone called Prank Call. This is actually out in English as a stand alone short story on Amazon.

Later the same year I won the Niels Klim Award for Best Danish Science Fiction Short Story. A horror/scifi short story called Homo Arachnida took home the award.
Homo Arachnida is a dystopian mystery, where the reader instantly knows something is very wrong with the world, but the back story slowly unfolds through seemingly mundane observations.
This too is out in English in the anthology “Lore: Vol. 2, No. 3“. 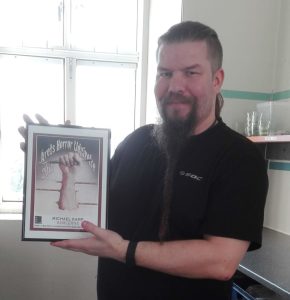 Finally I won the big one in 2015.
Best Horror of the Year.
It’s basically the Danish version of the Bram Stoker Awards and you can’t really get any more credit in the genre than this.
It was the novel Samlerne (The Collectors) which won the award in which a man is loosing both himself and his family when an evil force invades their home. It plays around with our concepts of reality and how sufficiently advanced creatures might treat us with the same indifference we treat ants and bugs.