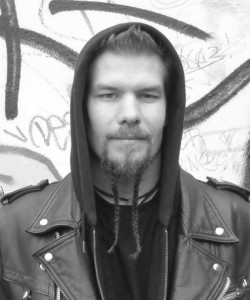 Michael Kamp1 was born and raised in the frozen wasteland of Denmark.

After wrestling a polar bear in the traditional Danish coming-of-age ritual (true story2) he chose the path of the storyteller.

Several novels and a few awards later, the time has come to go beyond his native tongue and take a shot at the English markets.

He is co-founder of the Danish Horror Society – a society of Danish horror authors dedicated to promote the genre as literature for adults.

He works the nightshift, writes out his nightmares and hope to someday create a story so frightening readers won’t dare to finish it.

He lives in Kirke Hyllinge with his wife, sons, and a pet troll.

—
1 Funny fact – Michael Kamp literally translates to “Mike Fight” or “Mike Battle” in English. If this writing thing doesn’t work out, he can always go into pro-wrestling.