SO tired. My feet are swollen, my back is aching and my arms are gorilla-like after hauling 20+ pounds of books from the Bella Center to my home town of Kirke Hyllinge. I just spent the entire weekend at Bogforum 2017 – The largest con by far for litterature in Denmark.

If you have never visited Bogforum, it might be hard to understand just HOW huge it is.
Three huge halls.
1,850 authors. 13 stages. Almost 35,000 paying visitors. It’s massive.

Here I am standing on the corner of ONE of the three main “highways” in the central hall. There was a separate, huge hall for children’s litterature and yet another huge area for micro publishers and self-publishing authors.

It’s Sunday afternoon and the visitors are thinning, but still going strong.

Let’s take a step back in time to Friday, where I had a signing session in the kids section at this wonderful cardboard table 🙂 I was peddling the Danish version of my novelette Clowns and my NekroMathias series.

This year my Publisher, Tellerup, had two stalls – a big one in the main hall and a smaller one in the kids section. More on the kid stuff later. 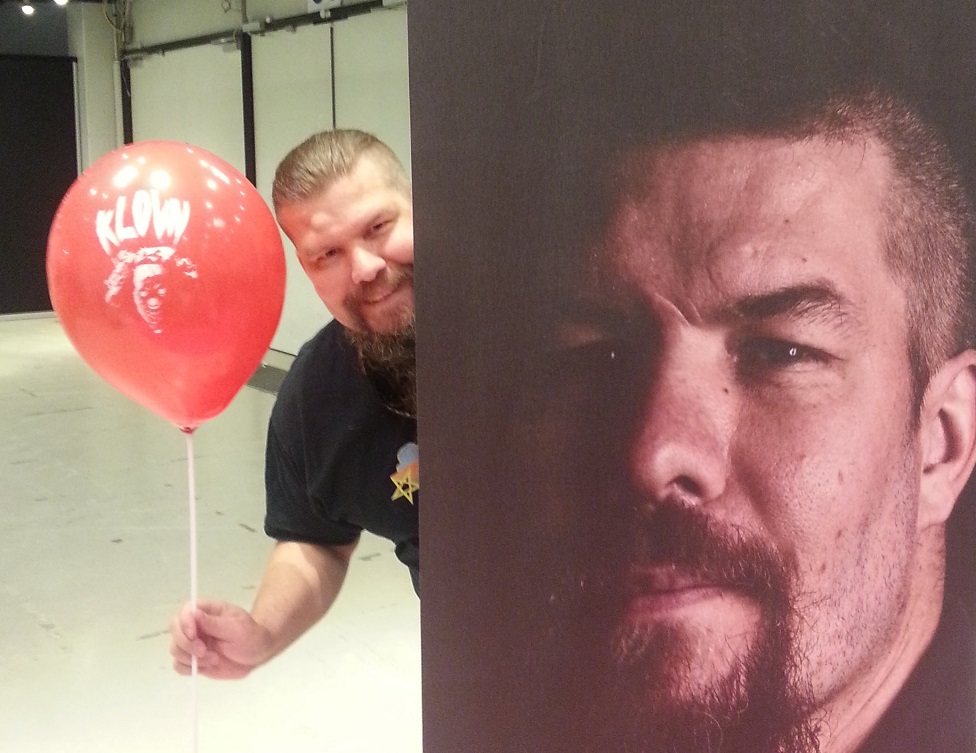 Hey kid! Do you want a balloon?

Tellerup had ordered 100 red balloons with promotional print as a gimmick giveaway, but they should have ordered 1,000. They were all gone within the first half hour, and they only barely saved one for me.

After the signing session I roamed the con for a while, meeting up with colleagues and looking around before returning to Tellerup’s backstage area at their main stall. 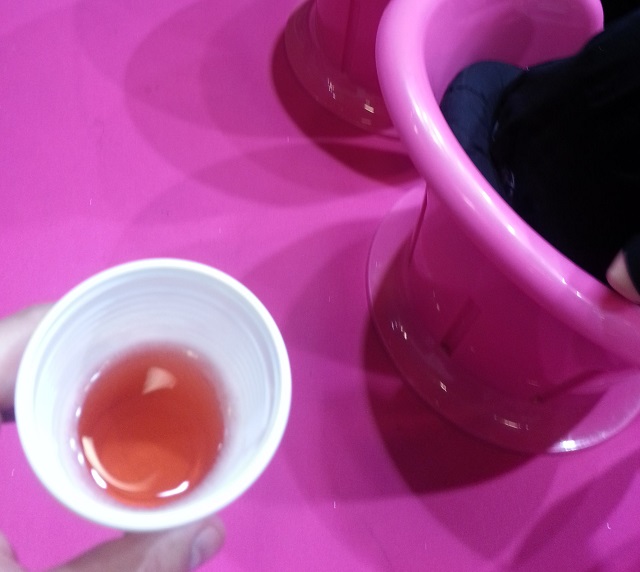 I am an award-winning horror-writer. Peddler of Nightmares. Disciple of the Dark Arts. Prophet of the formless, gibbering beasts beyond the Void.
And here I am sipping pink champagne on a pink chair in a pink backstage area 🙂

After chilling a bit I had to step back into the fray. Jean-Claude Mézières would be signing albums and I had to get to the stall.

Jean-Claude Mézières is the illustrator behind the Valérian and Laureline comic series (google it, you uncivilized barbarians.)

Those stories was a huge part of my childhood and since Mr. Mézières would only sign one album pr. guest, I picked out the oldest from my collection. Welcome to Alflolol from 1972.

I hurried to the stall and was quite surprised to find only two people queuing up.

Just as I got in line and thought this would be quick, I heard a distinct cough behind me and looked over my shoulder.

Somehow I had missed the very long line of people following the wall behind me. I apologized and hurried down the end of the impressive queue.
I’m just getting used to people queuing up to see me, so it’s probably healthy to get chased to the back of the line from time to time. 🙂 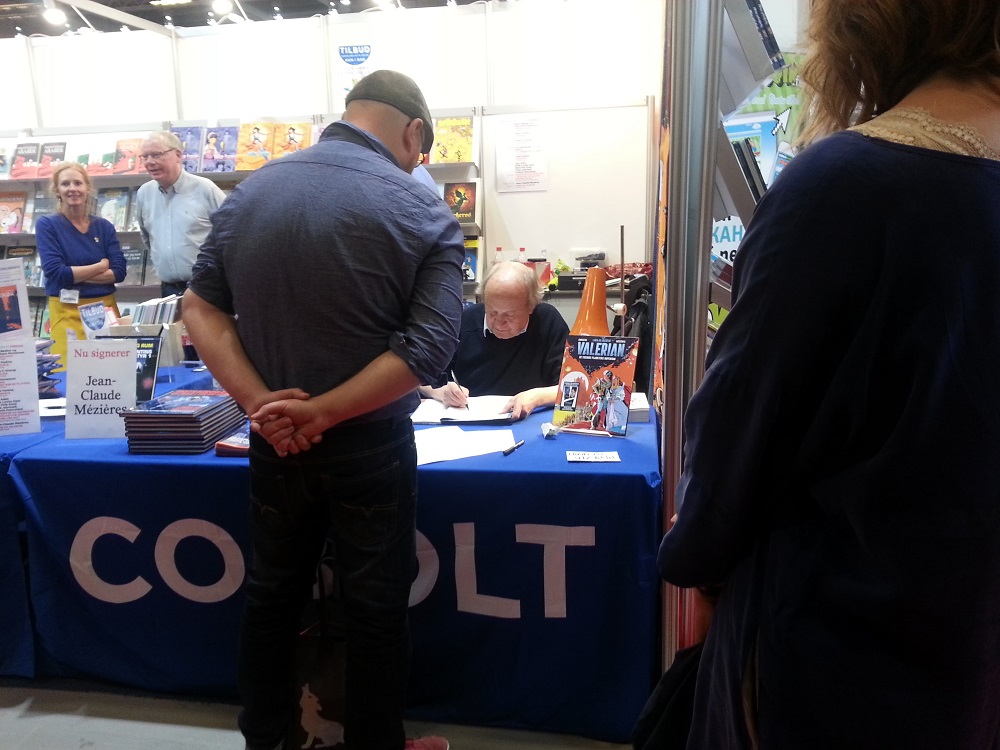 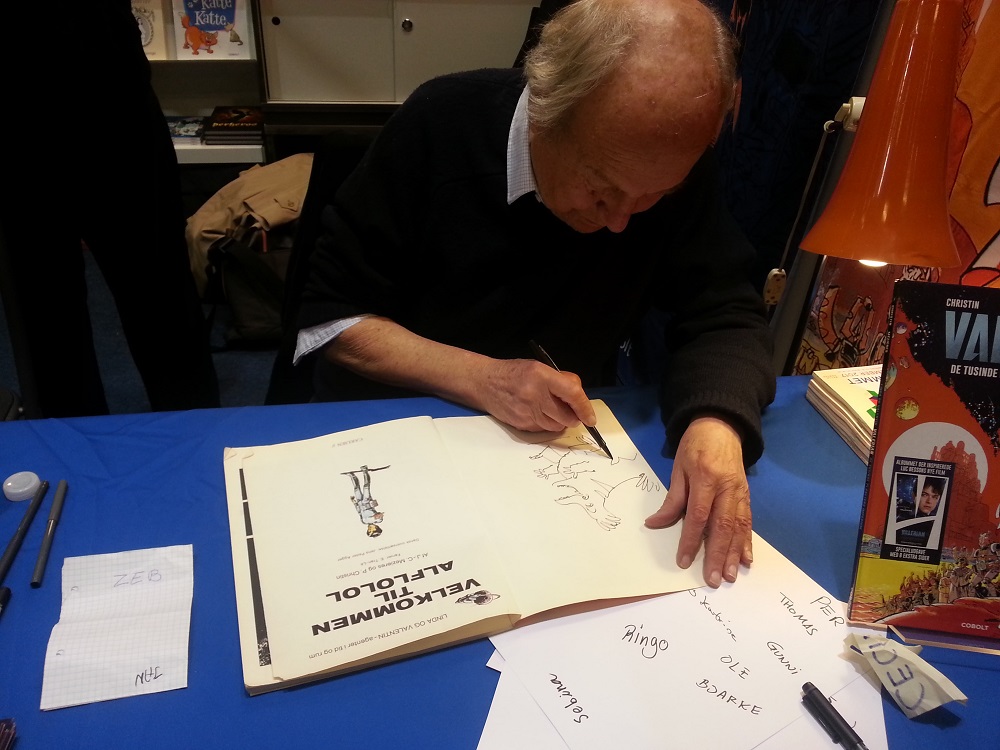 My turn at last.

I got my signing and happily went on my way.

Straight back to the backstage area. 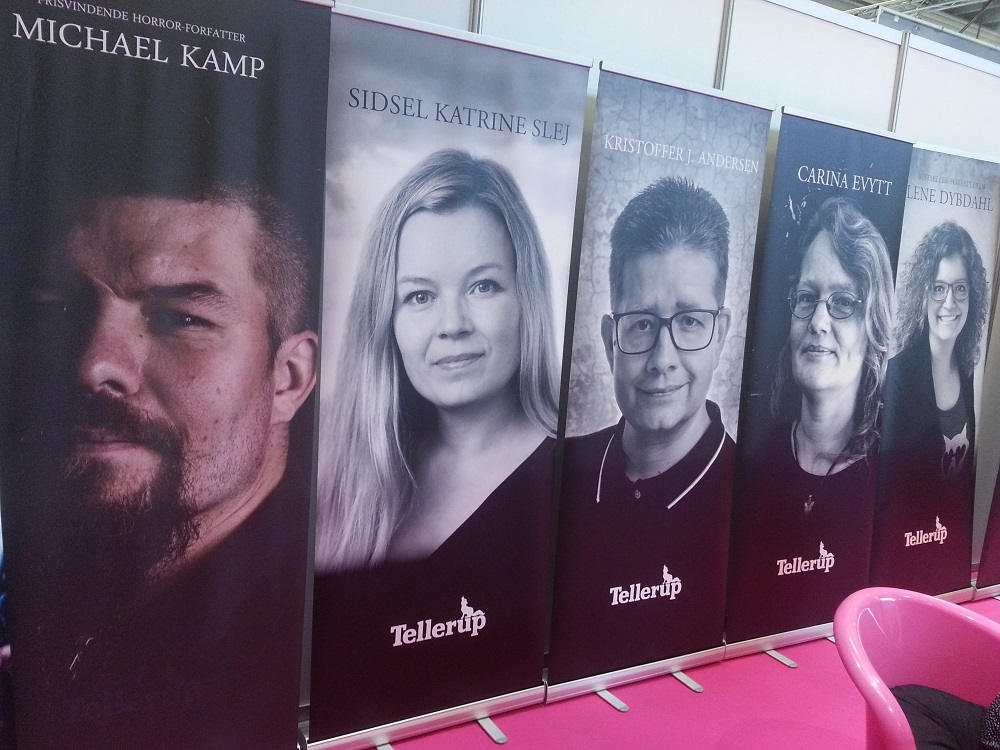 A small tour of the backstage area. The ethereal sounds at the end is Danish. Yeah.

Saturday we held a gathering of the writers of Tellerup. We were spoiled. 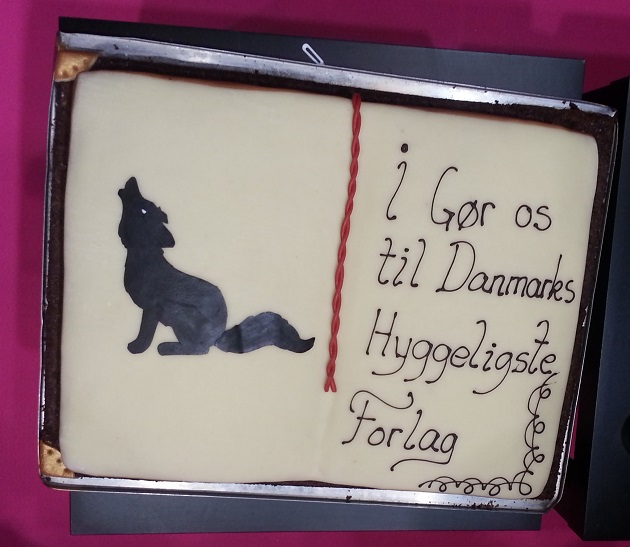 And a group photo.

Regular readers of my blog will notice that there are considerably more colors on the writers of Tellerup than the official Rot Pack pictures of the horror-writers at the crime fiction con. 🙂

Sunday was enjoyed at a much slower pace with a cup of coffee permanently lodged in my hand. I had developed a sudden headache after the gathering the night before and was dead tired. Must be a virus.

There were fewer guests and I could spent more time just roaming around when I wasn’t lost in deep meditation on a pink chair. 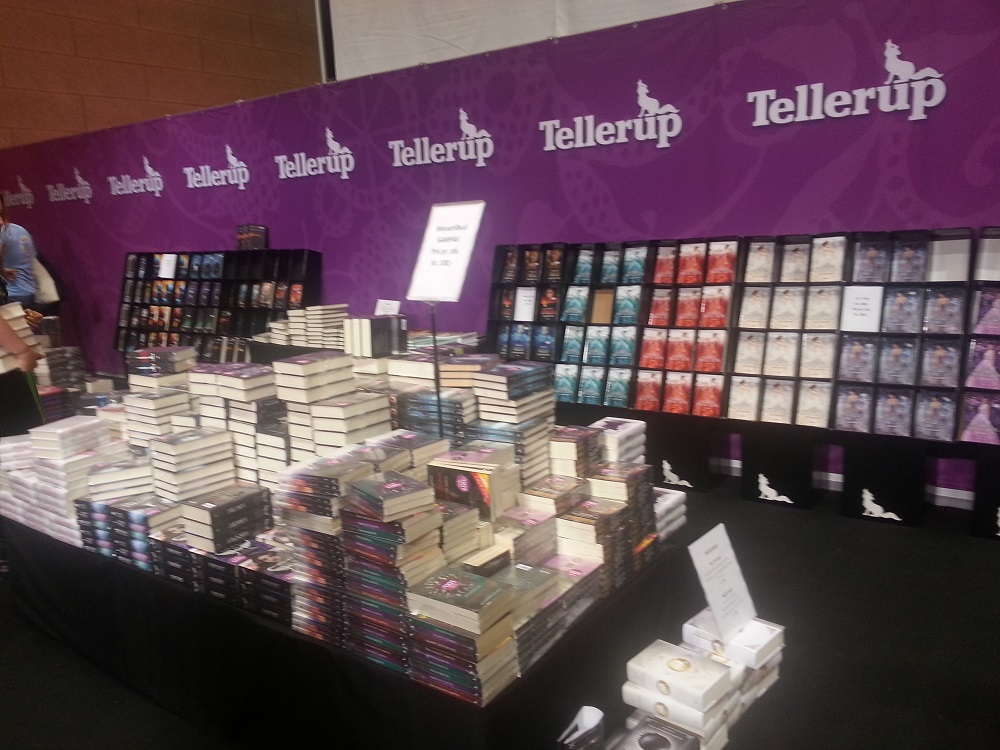 So. Much. Paranormal. Romance.

Now – I want to lead you into the kids area and show you something very Danish. 🙂 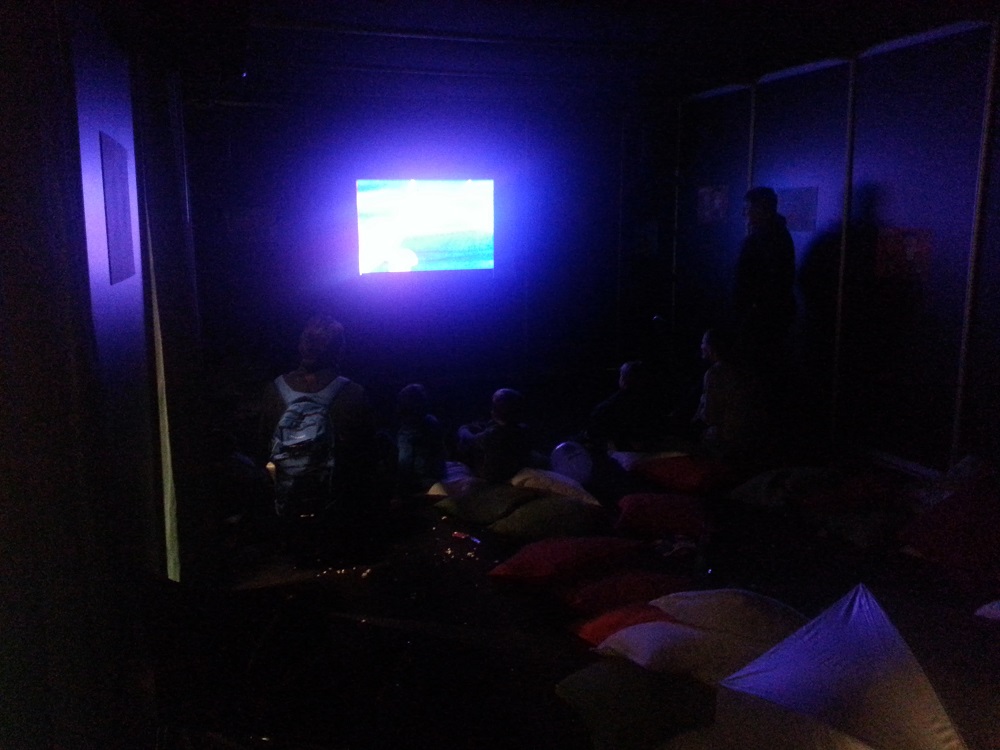 The kids area had their own movie theater.

Where the kids were being entertained by the topless mermaids of the animated movie Bennys Badekar (Benny’s Bathtub) – a classic. That would probably not go down well in the US. 😀 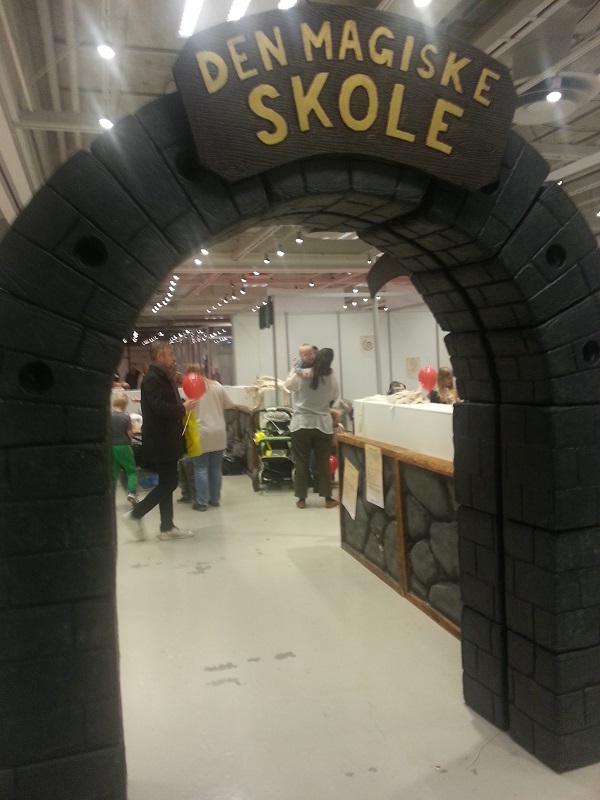 A portal into a “magical school” at the kids area. 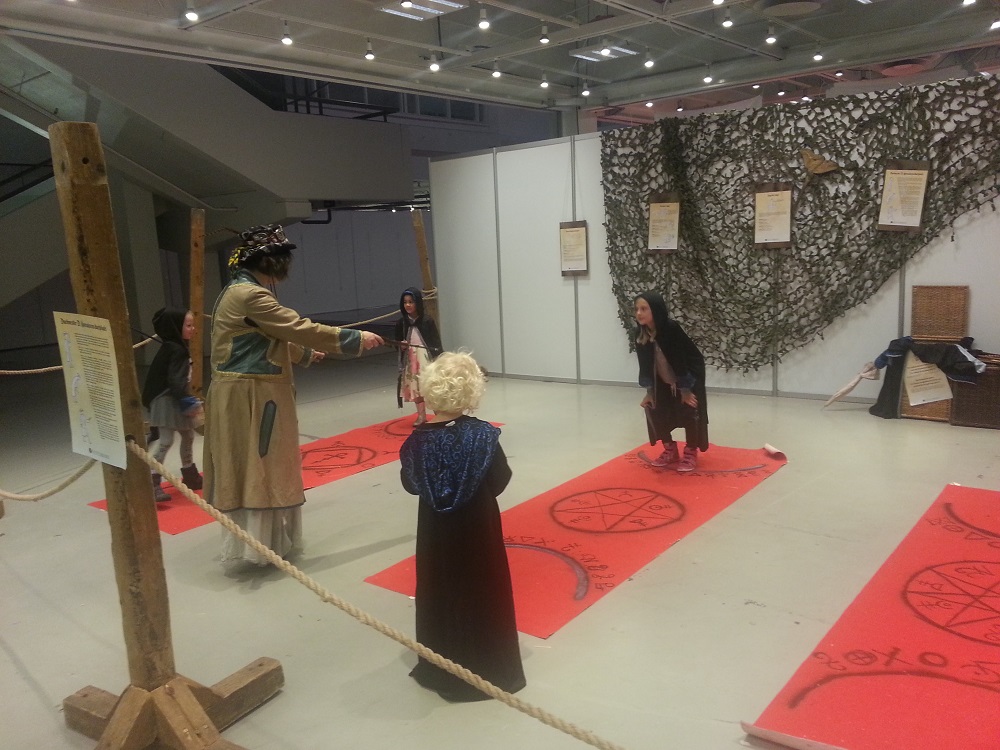 A tired warlock trying to teach the kids the Dark Arts. 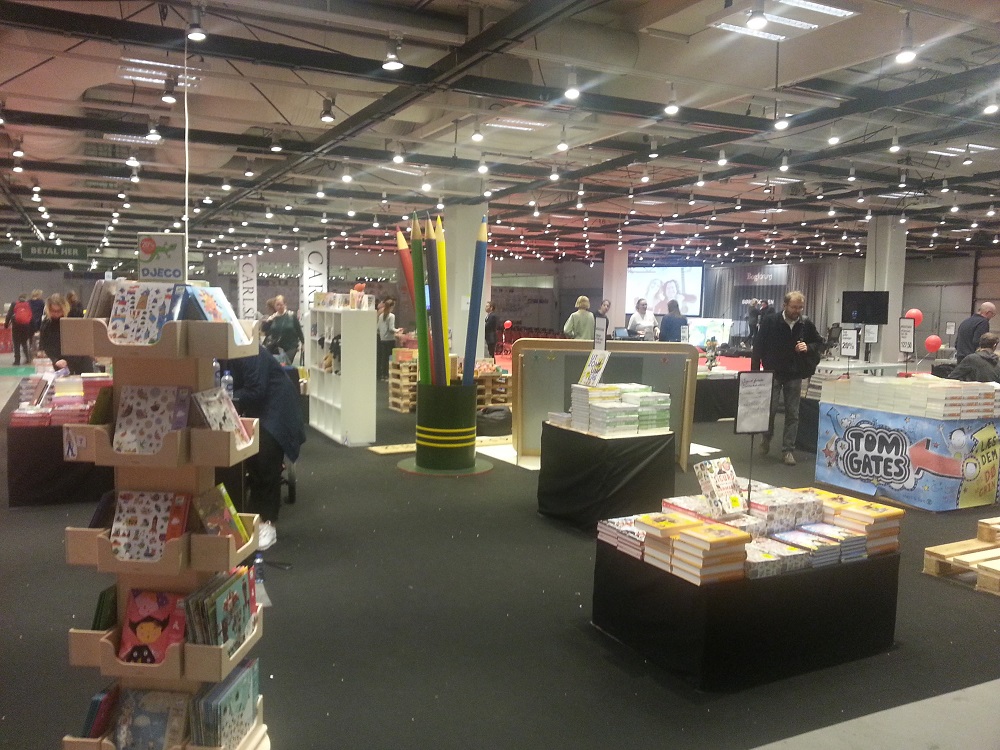 The kids area is getting empty late Sunday. 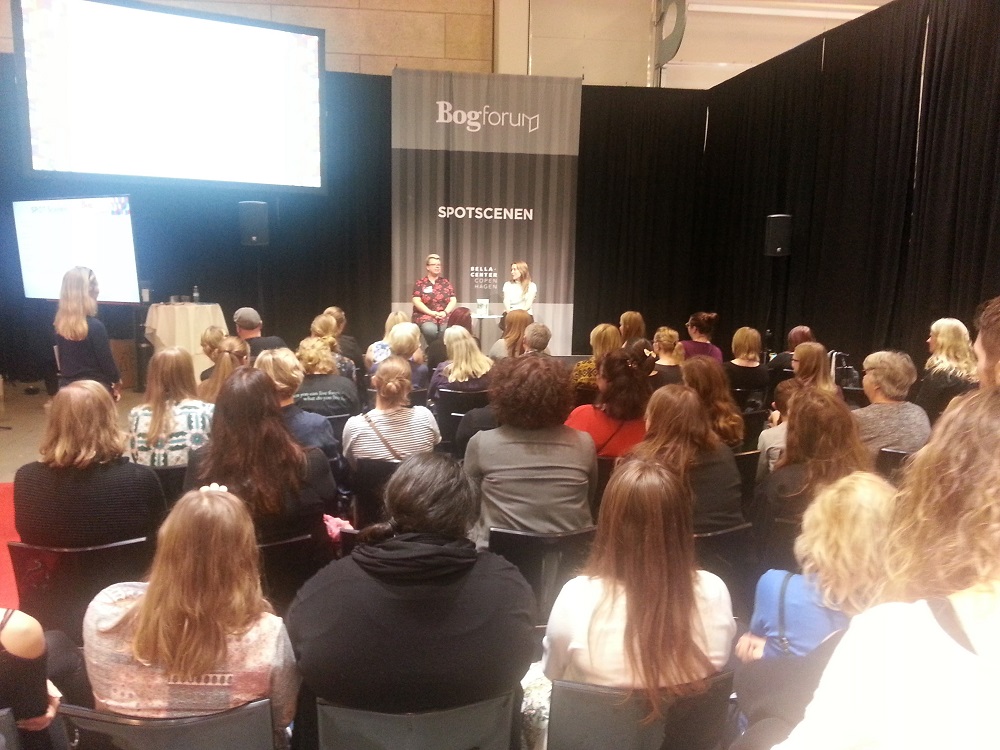 Last performance on the Spot-scene and still a respectable number of guests show up.

All in all a great weekend, although I am now filled up with social gatherings and will stay inside for a month.

We’ll do it again next year 🙂

This entry was posted in Author stuff, Events and tagged Bogforum 2017. Bookmark the permalink.