Four stars for the Danish version of Clowns

Clowns is live on Amazon, but I keep it quiet until Saturday when the campaign kicks off.

While I wait the Danish version is getting great reviews.

Four stars from the book blogger Sabrinas Blog.
“I was hooked by the first page and really enjoyed the story.”

The Clowns are coming! 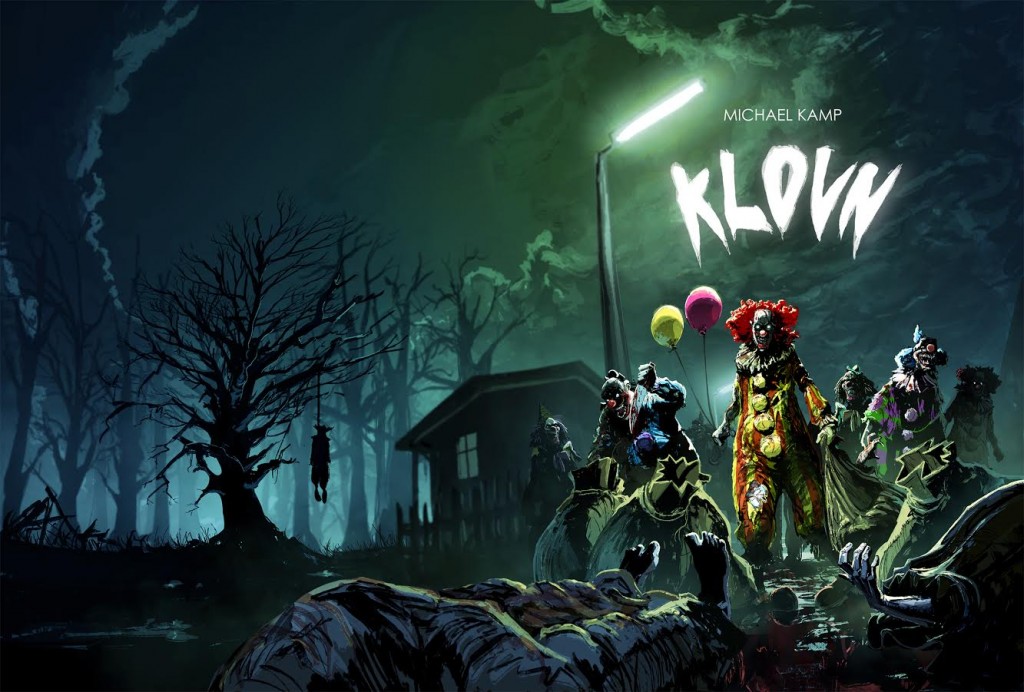 The translation of my YA horror novel Clowns is complete and the manuscript has been mailed to the publisher.

I’m looking forward to see if Danish murder-clowns can make any sort of impact in the market. 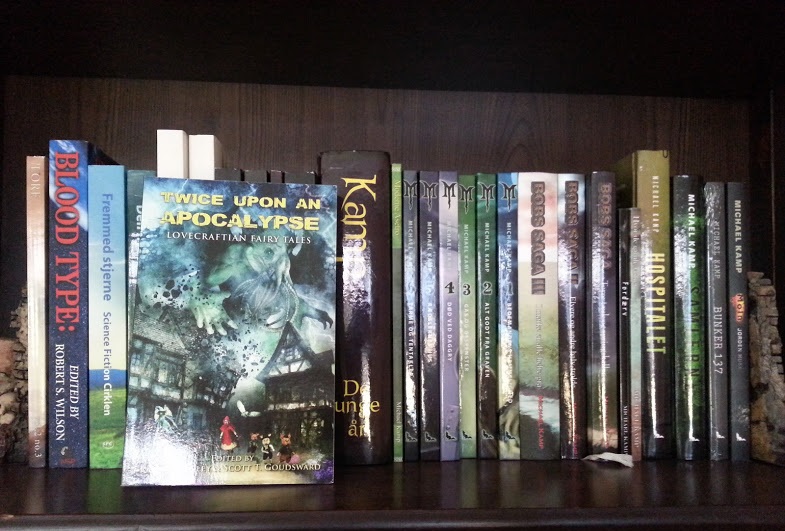 I’ve run into a bit of a luxury problem.

I just received my copy of Twice Upon an Apocalypse, and now there is just not room for it on my author shelf. I need to rearrange it to squeeze in the anthology.

So far I have 16 titles out and have participated in 7 danish anthologies and 3 in English.

My secret plan is to reach 100 publications before I retire, so I need to step it up a bit.

I managed to get myself on a US podcast today. 🙂

Armand Rosamilia shouldn’t need a lot of introduction – he is a prolific writer and you can check out his catalog HERE.

He also runs a podcast, Arm Cast Podcast, and in lieu of the recent anthology Twice Upon an Apocalypse, I was invited on to talk about translations and the challenges you face, when you write to a market on the other side of the globe.

Check it out here:

Twice Upon an Apocalypse 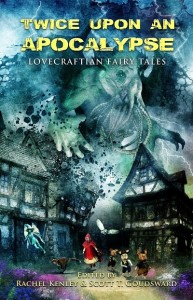 It has been way too long since I had any news to report on the US market, but here it is.

Twice Upon an Apocalypse is finally out and available on amazon.com.

This has been underway for a very long time. The original submission call went out way back in 2012, and my contribution, Little Match Mi-Go, was actually my very first sale of a short story in english.

Sadly the anthology languished in limbo for a while following a restructuring of the old publisher, but behind the scenes the forces of Good were working tirelessly to make it happen anyway.

And now – a mere five years later – it has risen from the Void.

These aren’t your mother’s fairy tales.

Throughout history parents have told their children stories to help them sleep, to keep them entertained. But we’re pretty sure none of those parents had this in mind. These are the fairy tales that will give you and your children nightmares. From the darkest depths of Grimm and Anderson come the immortal mash-ups with the creations of HP Lovecraft.

These stories will scare and delight ‘children’ of all ages!

Introduktion af Gary A. Braunbeck
The Pied Piper of Providence by Willie Meikle
The Three Billy Goats Sothoth by Peter N. Dudar
Little Maiden of the Sea by David Bernard
The Great Old One and the Beanstalk by Armand Rosamilia
In the Shade of the Juniper Tree by J .P. Hutsell
The Horror at Hatchet Point by Zach Shephard
The Most Incredible Thing by Bracken MacLeod
Let Me Come In! by Simon Yee
The Fishman and His Wife by Inanna Arthen
Little Match Mi-Go by Michael Kamp
Follow the Yellow Glyph Road by Scott Goudsward
Gumdrop Apocalypse by Pete Rawlik
Curiosity by Winifred Burniston
The Ice Queen by Mae Empson
Once Upon a Dream by Matthew Baugh
Cinderella and Her Outer Godfather by C.T. Phipps
Donkeyskin by KH Vaughan
Sweet Dreams in the Witch-House by Sean Logan
Fee Fi Old One by Thom Brannan
The King on the Golden Mountain by Morgan Sylvia
The Legend of Creepy Hollow by Don D’Ammassa

After patiently waiting for five years, I think you deserve a little sneak peak from my own story. 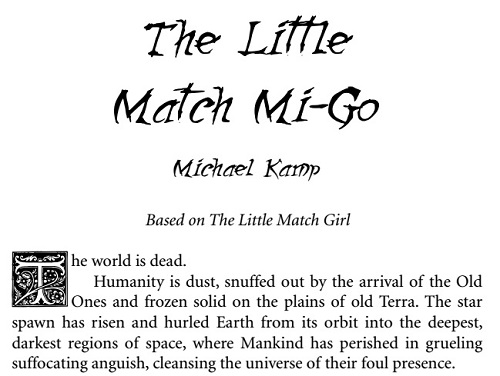 I’ll just leave this right here to brag about it.

My newest YA horror (only available in Danish so far) is coming out sometime after the summer holidays. A small, Danish town is suddenly overrun by clowns and they do not come in peace.

We’re working on a translation as I write this, so hopefully there will be more news soon 🙂

Best Danish Horror of the Year

Well, it is finally official. 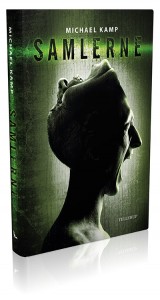 My horrornovel Samlerne (The Collectors) have just won the award for Best Danish Horror of the Year 2015.

I’m am intensely proud since the field is very competitive here and the quality high. The award is handed out by Dansk Horror Selskab (Danish Horror Society) every year to reward horror aimed at the adult market.

Five titles caught in a cage match to the death.

“Kamp have been considered one of the best horror writers in the nation for a while, not least due to his ability to create vivid and often quite brutal images in the minds of the readers which is very much the case in Samlerne.

It is the opinion of the jury that the style of Kamp’s writing add a rarely seen power to the story and that the sparse and controlled use of terror let the readers follow the protagonist, Thomas, into the darkness and feel his fear up close.

It doesn’t get better than this, and that is why Michael Kamp’s Samlerne have been awarded Best Danish Horror of the Year.”

Yeah.
Reading this I feel my head swell to twice it’s size. I am SO proud to receive this award, that I might be intolerable to be around for a while.

It’s my third award – achievement unlocked – but I’ll try not to let it get to me. 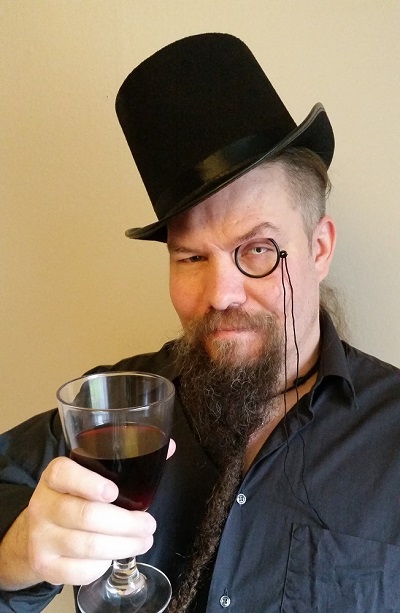 So once more I have traveled to the twin towers of the big Danish literature convention BogForum.

Sunday was the big day where I was to sit and sign fat stacks of my newest release, Nekromathias. (So far only available in Danish.)

One of the big advantages of being invited is the ability to walk past the huge line of commoners and get in early. Zing!

I like being early so I can walk around and get a feel for the convention before the unwashed masses arrive and lay siege to all the major stalls.

This is my publisher’s backstage area. It’s all nice and clean before the writers shown up to trash the place. Not sure about the pink chairs, though.

After a quick trip around the convention once more to map out the stalls I wanted to loot later on, it was time for my session. 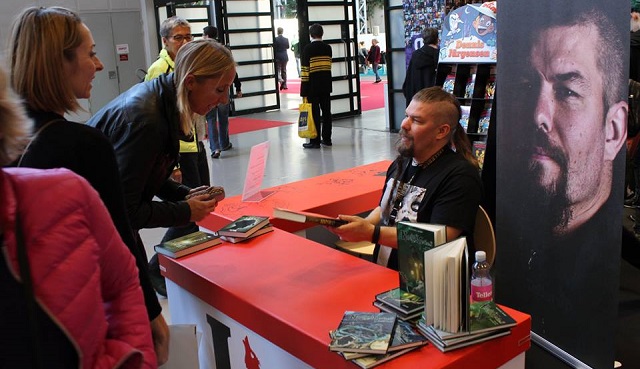 The whole thing is being monitored by my GIGANTIC head in the back. 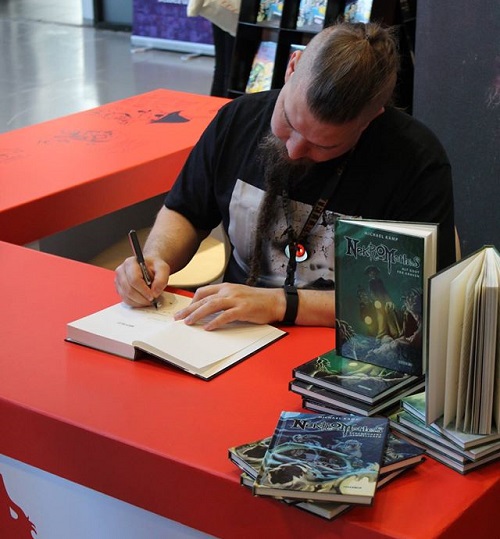 Every year I bring a little gimmick to the convention. Last year it was black contact lenses, this year it was a humble T-shirt. You might notice the eye is very prominent on this photo, but to really get the full experience we need a short clip.

My publisher, Tellerup, has put up 166 pictures of the convention on their Facebook page HERE. Go check it out.

After the session I managed to walk almost 6 miles back and forth between the stalls and ended up dragging home 10 pounds of books to the already overburdened shelves back home.

Now I just need to find the time to read them all.

Yay. My new series is out.

Nekromathias is my first series aimed at a younger audience. The libraries have it categorized at age 10+, but I’m not sure how this would translate internationally.
It is stock full of zombies, action and humor, all illustrated by the incredible Kent Overby Stück.

There are no plans at present to translate it, so for now you either just look at the pretty pictures or learn Danish. 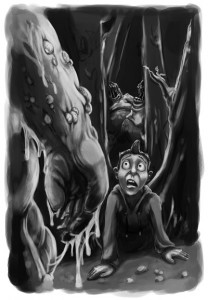 Nekromathias is the tale of Mathias – a young boy of 13 years who come to realize that this world hides a big secret.

Zombies are real. And they are everywhere.

Teaming up with his grandpa he must now learn the tips and tricks of the trade as an undertaker. They must be ready to move out and confront the undead, but the world must never know.

The first three titles are out now with more to follow.

Yay – my international work is rather slow these days, but I did manage to produce a guest blog at Horror Writers Association during their months of Halloween Haunts.

Every day a new post on Halloween is presented by the members, so please – Stay a while, and listen. :-p